Children and young people as referees

In the Power Cup, children and young people will be judging their age group. Team specific referee shifts are marked on the fixture list and it is up to the team coach / guard to decide which team to serve as referee / scorer. It is a good idea for a team adult to be in the background when needed.

Game judges are junior referees. For some, this is the first time in this role. Provide opportunities for positive experiences.
When the junior referee whistles, make sure that an adult is standing beside him. No need to intervene, give action and learn, but help when needed.

Each field has a bag containing the necessary equipment for playing and judging:

As a rule, referee shifts are arranged so that one or both of the teams in the match played will judge the next match on the same or adjacent court. A match can be more than just your own block game.

Ask the teams captains and coaches to check the result of the match, and be sure to end the match in the mobile protocol. If you have to use a paper protocol, record the result carefully, sign it and return it to your return area as soon as the game is over.

Power judging is fun when you remember a few basic things:

Be calm and make sure your feelings are kept under control, not just situation.
Remember to be impartial, thus maintaining your credibility.
Be resolute and make decisions / judgments as soon as possible, but don’t be hasty.
Be consistent, that is, follow the same line of judgment for both teams.
Blow the whistle as soon as you notice the violation, and then think about the right hand sign. If you don’t remember the hand sign, you can also report the violation verbally.
Review the Power Rules for your age group in advance.
The coach or guardian will be there to support you if necessary, but you will decide the verdicts.

The Super Series is designed for players who are already advanced in gaming, and is open to all teams of all ages. The Spur Series is for beginners and those with little practice. The top teams in the B and C categories this past season will not qualify for the Championship Series. In D-F Junior Teams, teams can participate in either series based on their own rating. All mixed teams participate in the Boys Championship.

There is a mobile protocol for all classes in the tournament

You can test the protocol usage in the Power Cup App. The protocol can be found under the heading “My” and a score. If you need to use a paper record, the book match number and the match score carefully, sign it and return it to your return area (tent at the edge of the field) as soon as the game is over.

Torneopal´s list of the players must include a note for over-age players.

The number of over-age players is set-specific in all age groups, so team may have more than one over-age player in the tournament, and all over-aged players may be nominated for the match but in one set of the game, only as many over-age players as the series regulations part 13.2 says can participate in the game.

Only Spur Series is allowed for players over the age of majority. According to the series, there can be over-aged people in a team:

Teams from abroad all participate in the Super series.

Rules of game approved by the International Volleyball Federation, the competition rules of the Finnish Volleyball Association and the special series orders for the Power Cup are compiled with at the tournament.

All age groups follow the rules of the international volleyball federation FIVB. There are a few alterations in the age groups D, E and F. Age group N22 plays best of three sets.

4 vs. 4 formation is used
the service rule is the same as in the winter series in Finland (2 services in a row)

3 vs. 3 formation is used
the service rule is the same as in the winter series in Finland (2 services in a row)

In Spur Series 2 vs. 2 formation
In Super Series 3 vs. 3 formation

We recommend to read the handbook before the tournament starts. It contains useful information about the rules and regulations in the different age groups as well as a map of the courts and other useful tips about the tournament.

The competition handbook for Power Cup 2023 will be published in spring 2023.

MunLentis app lets you see your schedule, schedule, leaderboards and more!
The contents of the coming summer will be updated during the spring. 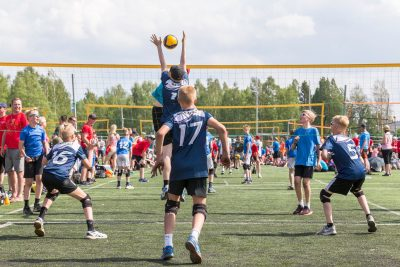