The game equipment is the Mikasa VS170W volleyball

The idea of ​​the game

The game is played on 2vs2. The idea behind the game is to get the ball across the net into the opponent’s field and prevent the ball from falling into its own field. Each ball won wins a point. The games are played with running points as games of two payouts to fifteen (15) points (point ceiling). In case of even winnings, the third round is played with running points to seven (7) points, with two points difference without a point ceiling.

The team is always forced to use 2 to 3 touches, of which the first and / or the 2nd can be a booth. A booth is a catch of a ball, from which the execution continues by a direct throw of a finger or a sleeve to a playmate. If the ball is picked up near the middle, the player can take one step towards the field and then continue his performance. An attack stroke is free (also striking is allowed) as long as it is not a booth assisted. If a player places a copy-assisted finger, sleeve or impact stroke directly on the other side of the net, the opponent will receive a point. Touching the player’s network in the antenna area is a mistake. The ball is allowed to hit the net. Fighting is allowed.

Starting is given behind the starting line with lower start-up (3 m). The start is always made by the player who comes on the pitch.
– The team that starts the first round is drawn before the game (the second team starts the second round)
– Teams start alternately (whichever team wins the point)
– The team will only make a round change when the starting turn comes. (except of course before the first ball of the series).

Number of players and position on the field
Two of the players are on the pitch at the same time, and the rest are waiting in line outside the pitch. Players can freely place on the pitch either side by side or in a row. The team consists of at least three players. Six players can form two teams.

The balls are played to the end. The team which passes next completes the substitution and the team which has passed the previous ball does not make the substitution. The player who has been on the field for a longer time will leave and the new player will be replaced (Figure 5). When making the first turn of the round, it is up to the team to decide which player to leave the field. After that, the players’ rotation order will remain the same throughout the round. When a team has an inning turn, the player who is left on the field by the turn of the turn is the starting turn. 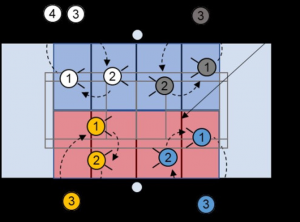 F-juniors rotation and examples of how players are located in 2vs2 games.

The field is 12m long and 6m wide
The starting line is 4.5 meters from the center line.
the height of the net is 165 cm
the Mikasa VS170W volleyball is used as the ball

Teams can be girls ‘, boys’ or mixed teams. The team consists of at least three players.

The starting and attacking receiving team is allowed one booth in the second touch of the team. After the booth, performance continues without delay with a finger or sleeve stroke. After the booth it is allowed to turn with the ball, movement is prohibited.
Tipping during the run is allowed, but the ball must not hit the ground. Execution should resume immediately after ascension.
The ball must not pass over the net as a post-booth performance.

In the F-junior Series, the games are played in two wins with a score of 15 points. With 1-1 draws, the third set is played to 7 points. A 2-point difference without a point ceiling is required for a draw.

F-junior rotation exchange and example player location on the Field3vs3games. (The players are free from the net, but the 2-player must be between the 1st and 3rd position laterally.